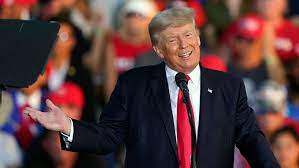 "This was the scam of the century and this was the crime of the century," Trump told a crowd of thousands at Ohio's Lorain County Fairgrounds, not far from Cleveland, where he began making good on his pledge to exact revenge on those who voted for his historic second impeachment.

The event was held to support Max Miller, a former White House aide who is challenging Republican Rep. Anthony Gonzalez for his congressional seat. Gonzalez was one of 10 GOP House members who voted to impeach Trump for his role in inciting the deadly Jan. 6 insurrection at the Capitol building. Trump has vowed to back those who run against them.

And while he praised Miller as an "incredible patriot" and a "great guy" who "loves the people of Ohio," Trump spent much of the rally fixating on the 2020 election, which he insists he won, even though top state and local election officials, his own attorney general and numerous judges, including some he appointed, have said there is no evidence of the mass voter fraud he alleges took place.