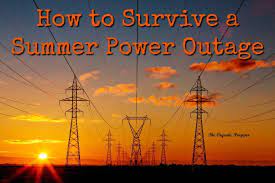 Sometimes people think that a summer power outage is easier to deal with than a winter one. After all, in the summer, you don't have to worry about freezing to death, which is a very real threat during a long-lasting winter outage.

However, a summer power outage carries its own set of problems. Foremost are heat-related illnesses and the higher potential of spoilage for your food. Even if you aren't convinced that hardcore preparedness is for you, it would still be difficult to argue against the possibility of a disaster that takes out the power for a couple of weeks. Basic emergency preparedness is important for everyone

, not just us "crazy preppers."

Severe, fast-moving thunderstorms (called derechos) swept through Indiana, Ohio, Virginia, West Virginia, Pennsylvania, Maryland, New Jersey, and Washington DC. Millions lost power, an estimated 4 million for an entire week. As if a week-long power outage wasn't miserable enough, that part of the country was in the midst of a record-setting heatwave during the time period.

Also keep in mind that summer stresses our fragile power grid to the max, as everyone increases their usage of electricity to try and keep cool with air conditioners and fans. This ups the chances of an outage even when there's not a cloud in the sky.

Back in 2003, a software bug caused an extremely widespread power outage in the middle of August. It was a very hot day, and increased energy demand overloaded the system. Because of the issue with the software, engineers were not alerted of this, and what should have been a small local outage turned into an event that took out power for over 10 million Canadians and 45 million Americans. I remember this one clearly because the little sub shop beside my workplace gave away all the perishable food that they had out at the time before it spoiled and I took home fresh sandwiches for my girls' dinner that night. We sweated uncomfortably through the next two days until the power was restored.