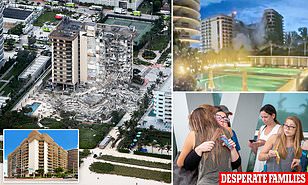 -Only one woman has been confirmed dead after the Champlain Towers South beachfront building collapsed at about 1.30am on Thursday in Miami's Surfside neighborhood

-Authorities, however, have warned the death toll could climb sharply given there were 99 people still missing as of Thursday afternoon. It remains unclear how many were inside the building when it crumbled

-Horrifying surveillance footage captured the moment the tower collapsed, sending a huge cloud of debris into the air

-Both cadaver dogs and rescue dogs are being used. Some signs of life have been detected in the rubble, but officials warn it will be extremely difficult to rescue those trapped safely

-As the desperate search for survivors continued, police were already probing the cause of the collapse

-Officials said the building, built in 1981, was going through a recertification process and that engineers had been hired to complete electrical and structural repairs

The moment Miami firefighters waded into flooded basement of collapsed 40-story condo in desperate search for 99 missing people is seen in a new dramatic video.

The Miami-Dade Fire Rescue video shows the rescue teams seemingly trying to drill through concrete in the basement parking garage at Champlain Towers. The firefighters are continuing to try to locate the possible victims while dealing with 'heavy damage and changing conditions 'in the parking garage.