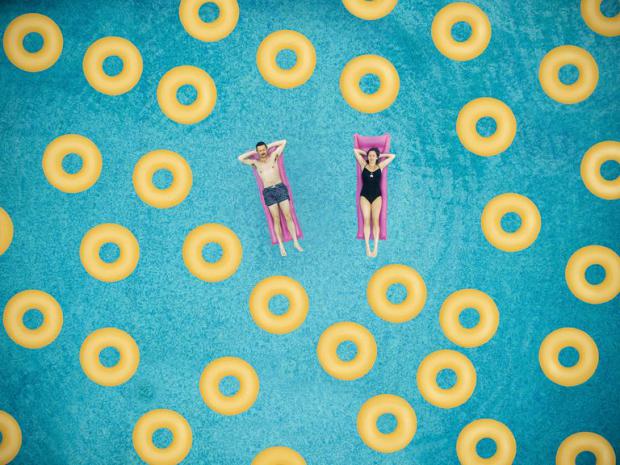 You can use it to compress air, or to spin up a giant flywheel, or lift a huge concrete block off the ground. Most commonly, you can simply use it to charge up some big ol' grid-scale batteries.

These are rapidly gaining popularity, and prices for large-scale battery storage are coming down quickly. At the moment, the cost of storing and releasing a megawatt-hour of electricity in a newly-installed grid-scale lithium battery is about US$150. That will continue to drop, but researchers at the International Institute for Applied Systems Analysis (IIASA) have put forth an option that could reduce the cost to $50-100 per MWh in certain locations.

Buoyancy Energy Storage Technology, or BEST, harnesses a force that'll be familiar to anyone who's ever held a beach ball under the surface of the water and let it go. Effectively, the proposed design starts with a platform secured deep into the sea floor with weighted anchors. This is connected via cables to an enormous square array – 100 meters (328 ft) a side – of high-density polyethylene pipes, each full of a compressed gas, like air or hydrogen.

Electricity transmitted from the surface via power cables is used to drive powerful electric motors, which pull the buoyant tubes down toward the sea floor to store the energy. When it's time to release energy, the tubes are released, and their powerful buoyancy pulls the electric motor in reverse, turning it into a generator and feeding power back into the grid.

The team's simulations project that this could end up being a cheap and effective energy storage system in certain situations – particularly offshore wind farms operating close to coastlines and islands with no mountains. But it won't replace batteries altogether.

It's an energy density versus power density tradeoff: the BEST system can store lots of energy at a competitive cost, but batteries are better at storing and releasing that energy quickly.