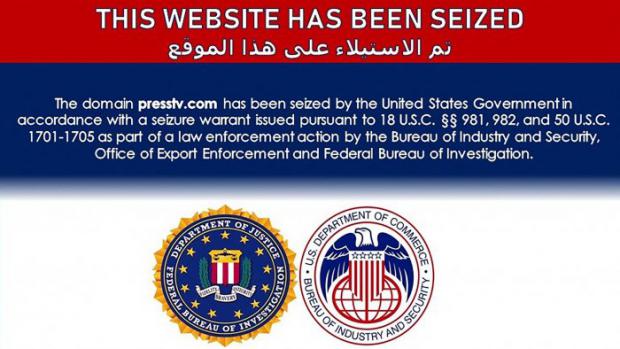 This Tuesday notices were put in place, for users seeking to access a number of websites critical of US foreign policy, notifying them that the US government had seized the domains. According to reports, the majority of the websites taken down were linked to Iran, or supportive of Iran, leading many to the conclusion that this was a targeted takedown of pro-Iran platforms.

In an Orwellian 'ministry of truth' styled fashion, without any pre-warning, content platforms such as PressTV have been axed from the Internet. Iran's state-funded PressTV has already been subjected to takedowns across social media, including having at least eight separate Youtube channels banned and even company emails blocked.

"The domain presstv.com has been seized by the United States Government in accordance with a seizure warrant issued pursuant to 18 U.S.C. 981,982 and 50 U.S.C. 1701-1705 as part of a law enforcement action by the Bureau of Industry and Security, Office of Export Enforcement and Federal Bureau of Investigation."

If correct, this means that the FBI has been involved in some sort of censorship campaign. CNN has quoted an unnamed US national security official who allegedly told them that the websites were taken down over alleged "disinformation efforts". There are also other allegations about the websites being taken down for support of terrorism, however these allegations are not yet substantiated as a reason behind the US governments move.