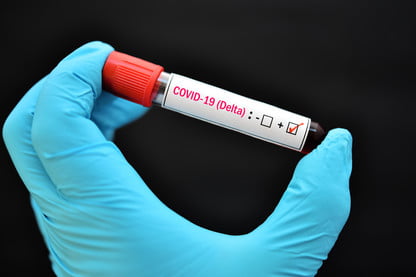 The emergence of a new SARS-CoV-2 variant from India, called "Delta," may result in a new round of lockdowns around the world, including the UK and Chile.

Research by Public Health England (PHE) suggests two doses of Pfizer's mRNA COVID shot is 88% effective against the Delta variant, while AstraZeneca's DNA injection appears to be 60% effective. After a single dose, either of the shots was only 33% protective against symptomatic illness.

PHE claims the Delta variant is 64% more likely to transmit within households than the Kent (Alpha) variant that had previously dominated, and that it's 40% more transmissible outdoors and more likely to affect younger people.

Variants are unlikely to pose significantly differing risk to people with natural immunity compared to the original, as resistance is primarily based on your T cells, which have been shown to recognize and attack variants that are up to 80% dissimilar. SARS-CoV-2 variants are at most 0.3% dissimilar from the original, which means T cell immunity will easily recognize and protect against them.

According to the regional director of the European office of the World Health Organization, Hans Henri Kluge, a new coronavirus variant called "Delta" (its scientific name being B.1.617.2 and originating in India) is "poised to take hold" in Europe, which may necessitate renewed lockdowns.