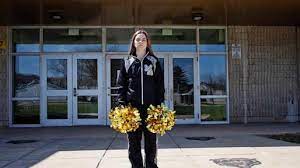 The case involved a disgruntled cheerleader, B.L. was a student at Mahanoy Area High School in Mahanoy City, Pennsylvania, who tried out for the school's varsity cheerleading squad.

When she did not make the varsity cheer, she was offered a spot on the cheerleading squad's junior varsity team.

"B.L. did not accept the coach's decision with good grace, particularly because the squad coaches had placed an entering freshman on the varsity team."

B.L. met a friend at the Cocoa Hut, a local convenience store, and used her phone to post two photos on Snapchat.

In the first image, both B. L. and her friend are shown with middle fingers raised with the caption:

In the second image, there is just a caption, which read:

"Love how me and [another student] get told we need a year of jv before we make varsity but tha[t] doesn't matter to anyone else?"