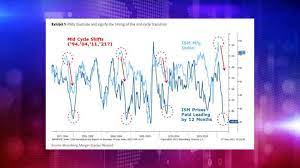 Traders of a certain age may recall that back in 2013, around the time the Fed's "Taper Tantrum" sparked a surge in yields and led to a risk asset selloff, a big (if entirely artificial) debate emerged within financial media, where the Fed muppets and their media puppets would argue that "tapering is not tightening" while anyone with half a brain realized knew that this was total BS.

Fast forward to today when Morgan Stanley's Michael Wilson opens up an old wound for clueless Fed apologists, saying in his latest Weekly Warm Up note that "Tapering is Tightening"... but then adds that contrary to the market's shocked reaction to last week's Fed meeting, tightening actually began months ago.

Elaborating on this point, Wilson - who several months ago turned into Wall Street's most bearish strategist (again)-  writes this morning that while the Fed's pivot to "begin" the tightening discussion caught most by surprise, in reality markets began discounting this inevitable process months ago as price action had indicated.