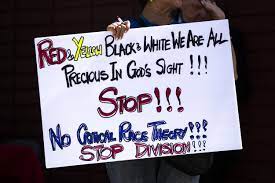 Those who know what CRT is don't like it. A new Economist/YouGov poll found opposition beating support by 58% to 38%. And opponents feel strongly. Those with "very unfavorable" views of CRT outnumber those with "very favorable" views" by 53% to 25%. Opposition is even more intense when specific tenets of CRT are polled.

What is CRT? Why the intense opposition? Does only the "right wing" oppose its teachings, as Gov. JB Pritzker claimed on Wednesday?

Call it "antiracism," "culturally responsive teaching," "equity" or "wokeness" if you want; dissecting the differences would be quibbling.

Here are the specific teachings they have mostly in common that are generating the rage:

Individuals are forever defined by race, not character. CRT expressly rejects notions of color blindness and the melting pot.

America is systemically racist and all whites are racists or at least implicitly biased.

The Constitution and the American system of government were designed to perpetuate slavery and oppression.

Equality of opportunity means nothing; only equality of results matters.

Individuals are either oppressors or victims; there's nothing in between.

America's true history is told by "The 1619 Project," which holds that America's real birth date was 1619 when the first slaves arrived, and that it is "out of slavery – and the anti??black racism it required" – that "nearly everything that has truly made America exceptional" grew.

That's probably enough to insult the core values and common sense of most Americans, but three overarching themes in CRT add to the fury.