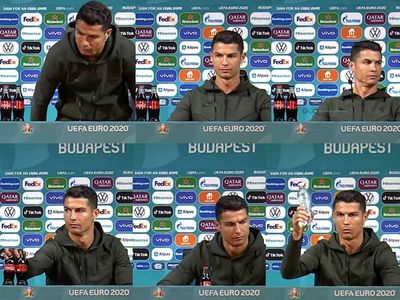 Ronaldo is famous for his dedicated approach to health and fitness, which he documents through Instagram. He made it clear what he thinks of the carbonated soft drink.

The Portugal captain shifted the bottles of Coca-Cola away from him during a press conference in Budapest on Monday, June 14, in the prelude to his country's Group F game against Hungary. He followed it by holding up a bottle of water and saying "Agua," the Portuguese and Spanish word for water, appearing to encourage people to choose water over Coca-Cola.

Coca-Cola is one of the official sponsors of Euro 2020. The company's share price dropped from $56.10 to $55.22 almost immediately after the press conference, representing a 1.6 percent dip.

The market value of Coca-Cola went from $242 billion to $238 billion – a drop of $4 billion. Coca-Cola's decline was in sharp contrast to the rest of the S&P 500, which rose 0.4 percent on Monday. S&P 500 is a free-float weighted measurement stock market index of 500 of the largest companies listed on stock exchanges in the United States.