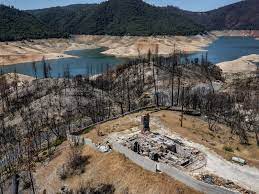 A megadrought and scorching heat, both worsened by La Nina weather effects, have depleted some of the water supply at Northern California's Lake Oroville. The lake's current water levels are hoovering around 700 feet above sea level, but if 640 feet is breached, then officials "will likely be forced to close the Edward Hyatt Power Plant for the first time since it opened in 1967," California Energy Commission spokesperson Lindsay Buckley told CNN.

The lake's record low is 646 feet, and the state's Department of Water Resources expects that level to be observed in August.

Earlier this month, at least 130 houseboats were evacuated from the lake as water levels continued to drop. As a result, any lower and boat ramps would be inaccessible.

Further, if the Hyatt plant closes, hydroelectric generation for the state's grid would be affected. At full capacity, the plant can power up to 800,000 homes.