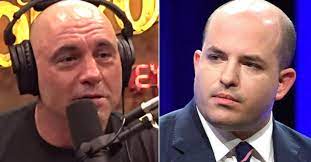 Rogan took exception with Stelter being incensed that more people were watching shows on YouTube than watching his show, according to Fox News.

"How about Brian Stelter talking to the press secretary, 'What are we doing wrong? What are we doing wrong?' Like, hey motherf---er, you're supposed to be a journalist," Rogan said.  "They're obviously being told a certain amount of what to do. And maybe he'd be an interesting guy if he had his own f---in podcast that you can rely on his own personality and be himself. I don't know. I can't imagine doing that gig."

"He's the worst," Rogan guest and progressive commentator Kyle Kulinski said. Stelter has "outright [called] for censorship under the guise of combatting the spread of conspiracy theories."

They "use that for f---ing everything," Kulinski said.