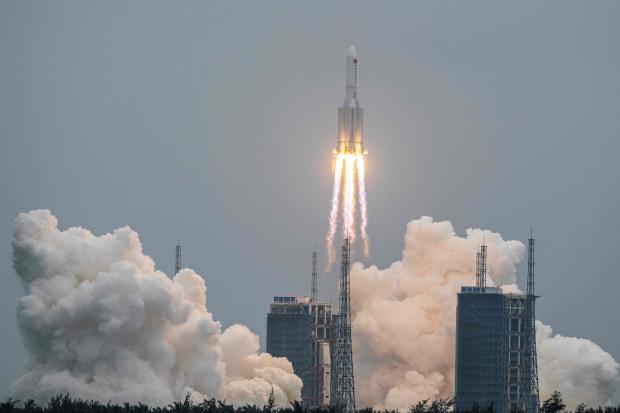 China is planning a space spectacular to celebrate the 100th anniversary of the founding of the Chinese Communist Party on July 23, 1921. Today, June 17, China launched a three-astronaut crew who will inhabit the command module of its soon-to-be-completed Tianhe Chinese Space Station. This planned human launch follows the June 10 multiple satellite deployment from Northern China's Taiyuan Satellite Launch Center. One of these satellites is designed to track near-earth asteroids.

As early as the mid-1950s, Chinese Communist Party (CCP) Chairman Mao Zedong declared, "We too will make satellites." Following that declaration, China aggressively began to compete with both the former Soviet Union and the United States in space -- an ambition seemingly energized by China's desire to develop a nuclear bomb and the means to deliver it. China's Space Program, called the "Two Bombs, One Satellite" project, was from its inception, placed under the aegis of the CCP's Central Military Commission, thereby underscoring the military orientation of its activities in space.

During the past few years China has staged a number of space spectacles. In 2018, it quickened its exploratory space activity by staging more launches than any other nation. Also in 2018, China's "Chang'e-4" spacecraft, named for a mythical Chinese goddess who supposedly inhabited the moon, was launched from the Xichang Space Center in southwest China. The Chang'e 4 landed its Yalu-2 land rover -- a first-ever landing on the far side of the moon -- on January 2, 2019. The Administrator of America's National Association of Space Administration (NASA), Jim Bridenstine, hailed the Chinese accomplishment. China's Chang'e 5, launched from an alternate space facility on Hainan Island in November 2020, collected more than four pounds of lunar rocks. China's National Space Administration (CNSA), established in 1993, recently topped off another series of space triumphs by landing a land rover on Mars this past May 15.