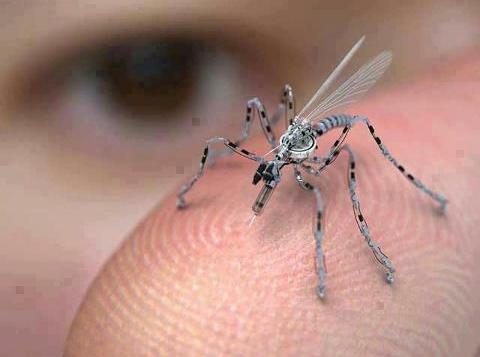 The US Air Force is creating microdrones that can flap their wings like a bird or insect.

The Air Force Research Laboratory (AFRL) is working with Airion Health LLC and using a 2014 patent to create a micro air vehicle (MAV) that can alter its speed and achieve 'insect-like maneuverability' for 21st century battlefields.

'Controllable forces would be generated by the wings based on position and velocity profiles, resulting in time-varying wing upstrokes and downstrokes, which, at times, may be asymmetrical,' a statement reads.

'The continuous process of updating the position and velocity, along with user-supplied inputs with a remote controller, will enable flapping wing MAVs to achieve the desired flight dynamics.

'Practical applications after successful implementation of the invention include, but are not limited to, in-the-open surveillance, aerial swarm operations, and battlefield situational awareness.'

The latter has become a 'major focus' for the Defense Department, according to Military.com.

Airion, which is headquartered in Los Angeles, describes itself as a company that was 'founded to solve complex problems for the US Armed Forces and the private sector.'

Airion Health's patent license agreement came from the Office of Research and Technology Applications (ORTA) at Wright-Patterson Air Force Base in Dayton, Ohio.