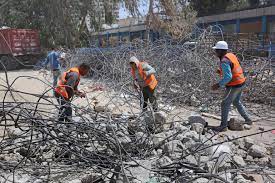 More than a month after Israel launched its deadly offensive on the Gaza Strip, residents are attempting to rebuild following the heavy destruction incurred by missiles and artillery shells.

The 11-day offensive, which killed 256 Palestinians including 66 children, was marked by its intensity and the targeting of civilian structures. On the Israeli side 13 people, including two children, were killed by rocket fire from Palestinian armed groups.

The coastal strip, one of the most densely populated areas in the world, sustained substantial damage to its infrastructure and buildings.

According to Gaza's ministry of public works and housing, 2,000 homes were destroyed, in addition to another 22,000 units that were partially damaged – resulting in the displacement of tens of thousands of Palestinians. At least four high-rise buildings were levelled, and 74 public structures, including ministry facilities, were targeted.