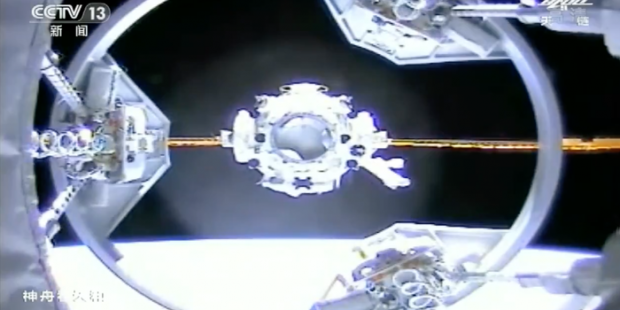 The morning rocket launch in northwest China sent a spacecraft carrying three astronauts into Earth's orbit, where it docked with the still-under-construction space station later in the day.

The liftoff, which Chinese officials called a "complete success," marks the first time in five years that China has sent a crewed mission to space. It comes amid a flurry of Chinese achievements in space that have spurred the United States to speed some of its own plans.

"Make no mistake about it: We're in a space race today, just as we were in the 1960s, and the stakes are even higher," Vice President Mike Pence said in 2019 while announcing that NASA would move up its return to the moon by four years to 2024 — a timetable the Biden administration has embraced.

Pence's comments came two months after China became the first nation to land an unmanned spacecraft on the far side of the moon, an act the vice president said "revealed their ambition to seize the lunar strategic high ground and become the world's preeminent spacefaring nation."

The Chinese space station represents another milestone for the country, which didn't launch an astronaut into space until 2003 — more than 40 years after the United States and the Soviet Union — but has since developed its space program at a torrid pace.