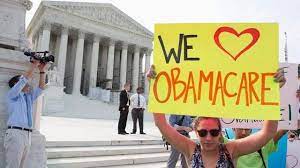 The top court voted 7-2 to reverse an appeals court ruling that had struck down the law's individual mandate provision.

President Joe Biden praised the ruling as a major victory and vowed to expand Obamacare.

The Supreme Court ruled 7-2 on Thursday against Texas and other Republican-led states seeking to strike down Obamacare in the law's latest test before the nation's highest court.

Breyer said Texas and the other states that challenged the law failed to show they were harmed by it.

"Neither the individual nor the state plaintiffs have shown that the injury they will suffer or have suffered is 'fairly traceable' to the 'allegedly unlawful conduct' of which they complain," Breyer wrote.