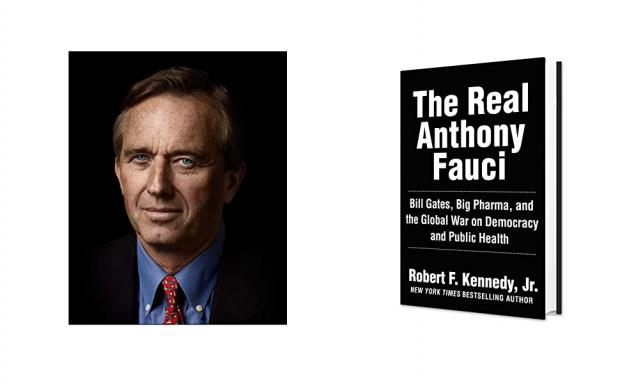 Buying this book will not only be an historical treasure for your home library it will be a guide towards the hoped-for 2nd Independence Day in America….  the release of America from the far-reaching grip of the Deep State capture of our country via the Bill Gates/Anthony Fauci pact that Robert F Kennedy Jr uncovers in his new text.

Kennedy Jr. reveals Gates has been conducting training exercises towards the overthrow of the United States without knowledge of the American people.  Fauci has power to shut down economies, bankrupt nations, destroy the middle class, abolish jury trials, destruction of due process, outlaw assembly, engineer a shift in wealth to the oligarchs, and abolish Constitutional rights, states Kennedy.

Dr. "Follow The Science" Fauci controls a $7 billion budget that uses vaccines as weaponry.  Kennedy Jr. discloses that the chronic disease rate in the US in 1968 when Fauci became director of the Institute of Infectious Disease was 6% and now is 54%.  Fauci turned his agency into an incubator of prescription drugs and vaccines.  His agency has a financial conflict of interest in vaccine patents.

In the year 2000 Fauci met with Gates in the State of Washington and they formed a vaccine partnership to co-develop vaccines, which now controls quasi agencies throughout the world.  They also control Microsoft, Google, Apple.  The spider web is vast.  Ten years later Gates appears at the UN to declare the decade of vaccines.