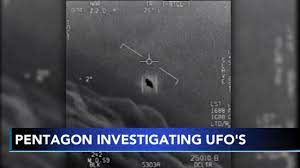 LAWMAKERS in Congress will be briefed today on the findings of the highly anticipated Pentagon report into UFOs, as one representative claims the aircraft must be from space, and not Russian technology.

US intelligence experts have produced a dossier on what the government knows about unidentified aerial phenomena, examining whether decades of orb sightings constitute a national security threat.

Rep. Andre Carson will chair a classified briefing about unidentified aerial phenomena which will be conducted by US Navy and FBI officials.

The lawmaker said the briefing was a "significant and timely topic" amid growing concerns that unidentified aerial phenomena pose a national security risk to America.

Skeptics think UAPs may have been sent by foreign powers amid suspicions that Russia is ramping up its testing of hypersonic technology.

But, Rep. Tim Burchett told TMZ he's "having a hard time" thinking that Moscow is involved.

He said: "If they had the kind of advanced technology pilots have reported seeing, Putin would already own America."

The congressman added that there's "something clearly going on" as he speculated a religious theory about the potential existence of UFOs.