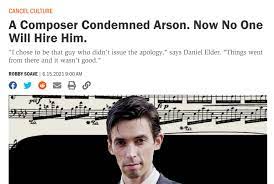 Until last year, Daniel Elder—a 34-year-old musician who lives in Nashville, Tennessee—had a promising career ahead of him. The theme of the prize-winning composer's work, truth through emotion, is evident across his catalogue of choral music, including his debut commercial album, The Heart's Reflection.

Elder isn't composing very much these days. And even if he were, no one in the industry is willing to buy his work. His publisher has blackballed him. Local choral directors refuse to program his music for fear of provoking a backlash. They won't even let him sing in the choir.

"My artistic wellspring is capped," says Elder. "I think it will come back, but things have remained in quite a rough place after all this happened."

What happened? Elder made a short statement on Instagram that went viral during the George Floyd protests in the summer of 2020.

The young composer is hardly the first person to suffer significant professional consequences after causing a social media firestorm: Virtually every day brings more examples of people saying slightly offensive things that stoke the fury of some mob. The problem is now so exhaustively covered in the media that "cancel culture" has become a top issue for many Republican voters, even though conservatives engage in cancelation as well.