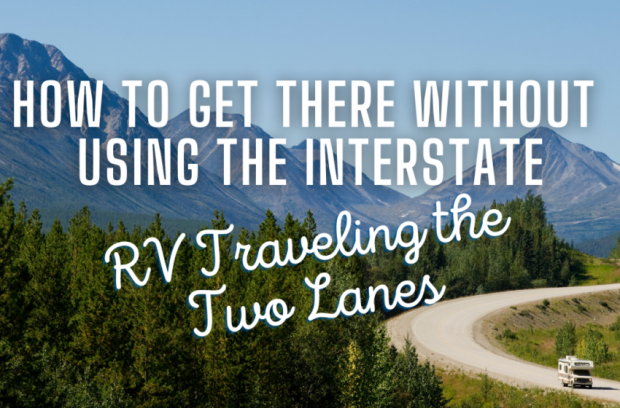 Charles Kuralt once echoed John Steinbeck by writing, "The interstate highway system is a wonderful thing. It makes it possible to go from coast to coast without seeing anything or meeting anybody. If the United States interests you, stay off the interstates." RV traveling is more satisfying when you stick to the 2-lane roads as much as possible. Where Interstate highways offer a faster way to get between points, they lack the scenic beauty of America's open roads.

There are Many Reasons To Avoid Interstates

Interstate highways are indispensable if you have vehicle problems or need major shopping areas, but the back roads and scenic byways offer quite a few advantages and are seldom far from the major roadways. Some of the best reasons to avoid the interstates include:

Traffic Congestion – Because they run alongside the Interstate system state roads and U.S. highways have a lot less traffic and tractor-trailers are a rare occurrence. If you are trying to avoid rush hour and large commercial vehicles, the 2-lane roads are ideal for RV drivers.

Lack of Scenic Stops – As mentioned, you can now travel the country without seeing much. Since the RV lifestyle is all about seeing the sights and experiencing localities, RV traveling on the 2-lanes is the way to get to historic markers as well as state and national parks.

Point-to-Point Travel – The interstates are all about getting you from one location to another in the shortest possible time. Some offer exits into small towns, but many times the villages and burgs that have made America great are secluded from the Interstates. U.S. highways tend to wind through these small towns, where rustic storefronts filled with mom and pop businesses are still the order of the day.