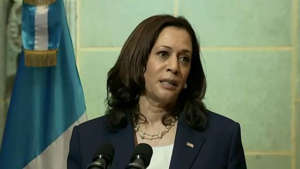 While everyone is focused on the border and telling Kamala to go there, we missed the real reason she was in Guatemala…She was on a secret political mission, and it's not about the "border."

It's about overthrowing the conservative party that's currently in power…and the people of Guatemala know it…that's why they were standing there when she arrived, telling her to go home, and that "Trump won."

Frontpage Mag reported that President Giammattei is a staunch law and order conservative, and if he appeared to be undermining Kamala, it was because she had spent months undermining him.

In May, Kamala met with a number of leftist opponents of Giammattei, including former Attorney General Thelma Aldana, who had targeted conservative politicians with corruption charges, before herself being charged with corruption. Instead of returning home to face those charges, she received political asylum in the United States. Her social media is full of praise for Kamala Harris' trip to Guatemala, and her promises to end "corruption" in Guatemala.

A Dark Side of Inflation

August Will Be A Real Turning Point - Welcome To The Biggest Eviction Horror Show In U.S. History