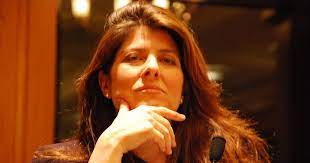 Was erratic during the interview, making outlandish claims before backtracking

Refused to reveal if she had received the jab, said question was inappropriate

Feminist author Naomi Wolf has refused to backdown after being suspended from Twitter for spreading outlandish theories about vaccines and 5G.

Dr Wolf, author of third-wave feminist book The Beauty Myth, said she was not a conspiracy theorist despite the recent ban.

She slammed Twitter for de-platforming her, arguing the platform should allow people to appeal rather than simply 'hang up' on them.