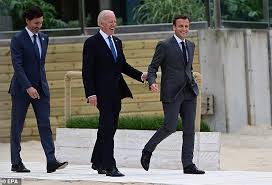 Macron even got in a swipe at former President Donald Trump in his remarks, when he fawned over Biden as being 'part of the club.'

'What you demonstrate is that leadership is partnership. I think it's great to have the US president part of the club, and very willing to cooperate,' Macron said as Biden sat beside him, smiling and nodding.

The two men met on the sidelines of the G7 summit, which took place at the picturesque Cabris Bay in Southern England.  The vibes between them were as warm as the sunny British day with Biden, at times, roaring his head back with laughter at Macron's words.

When reporters asked Biden if 'America is back' - the phrase the White House has used repeatedly on his trip - Biden pointed to Macron and said 'ask him.'

The three-day summit in Southern England has capped a closing period for both America and the world on Trump's turbulent four years as president.

Trump often disagreed with his fellow leaders', refused to sign their communiques, and bashed them on Twitter.

After a 2018 G7 meeting, hosted by Justin Trudeau, Trump called the Canadian Prime Minister 'dishonest' and 'weak' because of comments Trudeau made on tariffs during the summit.