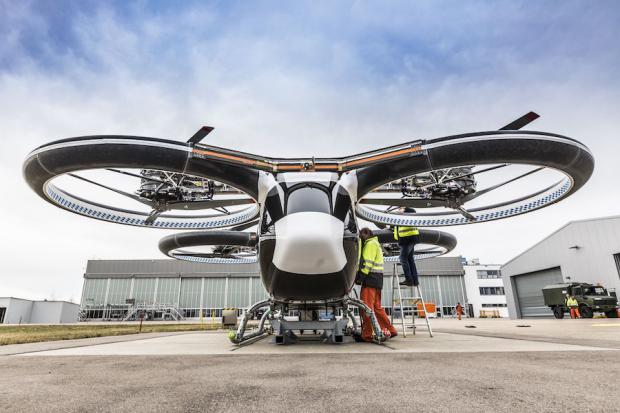 Most eVTOL startups (such as SureFly) are designing and developing drone taxis with a maximum capacity of between 2 and 5 seats. Kelekona's founder, Braeden Kelekona, is thinking big with a 40 passenger drone bus that weighs 10,000 pounds and has an estimated range of 330 miles, with the ability to fly between Los Angeles and San Fransico in one hour.

Kelekona appears to be developing an eVTOL vehicle inspired for mass transit in regional commutes, where passengers can avoid congested highways, traditional airplanes, and trains.

"One hundred percent we are trying to compete with public transportation," Kelekona told Digital Trends.

According to Kelekona, routes between Manhattan to the Hamptons; Boston to New York; New York to Washington, D.C.; and Los Angeles to San Francisco will cost around $85 and last for 30 minutes.

The airframe's shape is certainly impressive in terms of aerodynamics. Four fan banks power the eVTOL with two ducted fans with variable pitch blades inside each. These fan banks can lift the aircraft up and down and propel the craft forward like a traditional airplane. Kelekona said eVTOL would be powered with "batteries similar to what you see in the Model S."

"What we decided to build is a flying battery," he noted. "What that allowed us to do is have greater endurance. Instead of building an interesting airframe and then trying to figure out how to put the battery into that aircraft, we started with the battery first and put things on top of it."