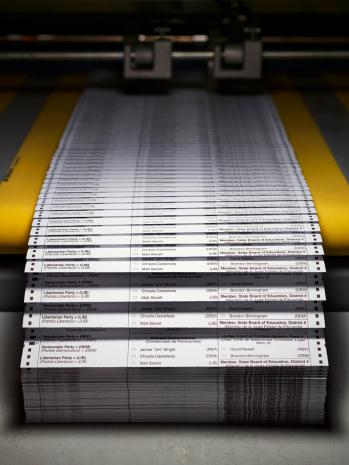 It's in the ballots.  Now the printers of the ballots are in the hot seat.  They better lawyer up.  It appears that ballots in Republican areas were printed differently than in Democrat areas which caused more Republican ballots to go to adjudication and potentially be recorded as Biden votes.

We reported in December that inventor and data expert, Jovan Hutton Pulitzer identified a pattern in Georgia where Republican district ballots were printed differently than Democrat district ballots.  The Republican areas' ballots were set up where a large percentage would go to adjudication.  This allowed unknown individuals to record all the ballots for Biden.

Yesterday this same situation was discussed on Steve Bannon's WarRoom Pandemic.  In Antrim County, Michigan attorney Matt DePerno provided a double-bombshell update to his case relating to that county's November 3, 2020 election and its voting machines and ballots from Dominion Voting Systems. On December 4, 2020, DePerno, on behalf of his client, William Bailey, successfully received a court's permission to forensically audit the county's Dominion machines used in the November 3, 2020, Antrim County elections.

DePerno had to fight off legal attempts to stop the public disclosure of this data, from both the radicalized Michigan Attorney General, Dana Nessel (D), and the Soros-backed dishonest and equally radical Michigan Secretary of State Jocelyn Benson (D).

Nessel filed a lawsuit, which Benson signed onto, to stop the release of this information!