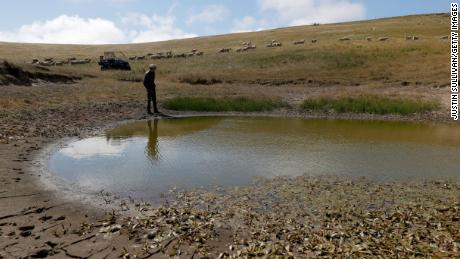 In my entire lifetime, this is the worst that drought conditions have ever been in the western half of the country.  During the past 20 years, the amount of territory in the West considered to be suffering from exceptional drought has never gone higher than 11 percent until now.  Today, that number is sitting at 27 percent.  The term "mega-drought" is being thrown around a lot these days to describe what is happening, but this isn't just a drought.  This is a true national emergency, and it is really starting to affect our food supply.

"Normally this time of the year, we're probably looking at 400-600 head and a lot of times would be every other week," said former auctioneer Ron Torgerson.

On Sunday and Monday, more than 4,200 head of cattle were sold at Rugby Livestock and Auction.

Needless to say, ranchers in North Dakota don't want to get rid of their cattle, but the drought has pushed prices for hay and corn so high that many of them simply have no choice.

As the drought continues, the price of hay and corn has gone way up. It's more expensive for ranchers to try and supplement feed than it is to sell the cattle.

Bohl has already sold 200 of his head in the last month.