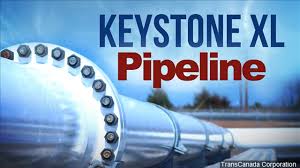 TC Energy Corporation confirmed Wednesday that after careful review of the available options and after consulting with the Government of Alberta, it has officially canceled the Keystone XL.

Construction activities were stopped back in January.

The project's cancellation comes several months after President Joe Biden revoked the Presidential Permit for the pipeline on January 20 of this year, in what was mostly seen as a death blow for the pipeline.

TC Energy will now set to work on how it will wind everything down while continuing to meet its environmental and regulatory commitments.

Canada had previously warned the United States that scrapping the vital oil pipeline would weaken relationships between the two countries.

Proponents of the Keystone XL project have argued that scrapping the Keystone XL would not diminish the demand for the heavy crude oil that the pipeline would have carried to U.S. refineries. Instead, it would merely raise the United States' dependence on crude oil from OPEC countries. An argument has been made that it would also kill jobs on both sides of the border.

China's digital yuan could pose challenges to the U.S. dollar