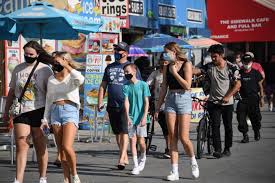 The hottest and most fire-prone months are nearing as a second heat wave of the season could arrive as early as next week.

How the season turns out may depend on the immediate climate in the state. Extreme heat and drought are several factors that may produce dry fuels and eventually spark fires.

Prospects of the next heat wave come as the Drought Monitor (dated June 3) shows much of California, nevertheless, the West Coast, is experiencing some level of drought.

California could be headed for a dangerous wildfire season with conditions already parched.