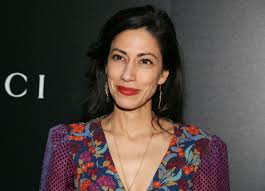 Abedin's "Both/And: A Life in Many Worlds" will be released Nov. 2, Scribner told The Associated Press on Thursday. Abedin will tell "her inspiring story, coming of age as an American Muslim, the daughter of Indian and Pakistani scholars who split their time between Saudi Arabia, the United States, and the UK," according to the publisher.