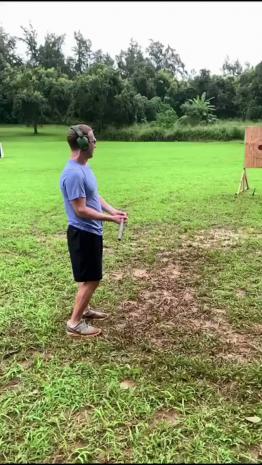 Mark Zuckerberg is drawing jeers on social media after posting a slow-motion video of himself throwing spears while wearing ear protectors.

The Facebook founder shared the clip on Monday with the caption: 'I have a very particular set of skills,' drawing his inspiration from the film Taken.

Critics were quick to mock the unusual display and seized on Zuckerberg's ear protectors - which seemed to be an unnecessary accessory for the activity that doesn't emit much sound.

Others questioned whether Zuckerberg is training to escalate his war with Apple CEO Tim Cook.

The tech titans' feud ramped up this week with Zuckerberg taking a shot at Apple on Twitter by writing that Facebook would 'introduce a revenue share ... less than the 30% that Apple and others take.'

The spear-throwing clip followed another eyebrow-raising video in which Zuckerberg fired a bow and arrow at a line of bowling pins.

It's not clear where the videos were filmed, though Zuckerberg has property in both Palo Alto, California, as well as Hawaii, where he has been photographed multiple times since the onset of the pandemic.

Zuckerberg prefaced the videos by writing: 'A trail I wanted to hike is out of hiking permits, but has plenty of hunting permits available.

'That's basically saying: look, you can't walk here unless you also bring a bow and arrow. So I guess we're doing this.'