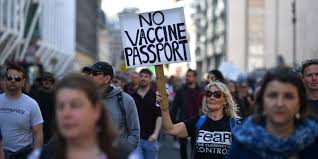 In the U.K., Britons held a "Unite for Freedom" rally in London, Saturday May 29, 2021, as seen in the short video clip above. According to ITV.com,1 hundreds of no-vaccine-passport protesters surged into the Westfield shopping mall in London, while another large crowd gathered in Parliament Square.

They were reportedly cleared from the mall after about 20 minutes by police, but no one was injured or arrested in this particular instance.

As reported by Reuters2 May 30, 2021, it now looks like the U.K. will be scrapping its plan for vaccine passports as a legal requirement for large events, although a government spokesman told Reuters that a final decision has yet to be made and that the COVID-19 vaccine certification review is still ongoing. Why the sudden change? Undoubtedly, it's because Britons have repeatedly taken to the streets in protest of the medical apartheid these passports create.