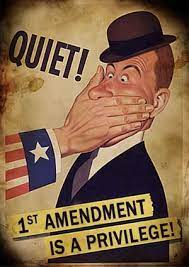 However, what goes unexplained in such pious proclamations is why so many leading executives in big American companies remain silent when it comes to America's foreign wars, foreign interventions, coups, alliances with dictators, torture, mass secret surveillance, indefinite detention, denial of due process, Gitmo, state-sponsored assassinations, and other dark-side activities of the U.S. national-security establishment.

The reason is that every one of those executives knows that federal officials are able to retaliate against them in indirect ways for criticizing their policies and operations. Such indirect methods of retaliation can consist of IRS audits, regulatory harassment, denial of applications for mergers and acquisitions, non-renewal of radio and television licenses, and even the threat of disclosure of personal secrets acquired through secret surveillance of emails and telephone records.

A good example of free speech nullification involved President Lyndon Johnson, soon after he became president after the assassination of President Kennedy. Johnson's indirect nullification of the First Amendment is set forth in Robert Caro's book The Passage of Power.

Prior to the assassination, a Dallas reporter named Margaret Mayer had begun investigating Johnson's radio and television stations in Austin. On the evening of Saturday, January 4, 1964, Johnson telephoned her paper's managing editor and spoke directly about what he was prepared to do if the paper didn't stop Mayer's investigation.