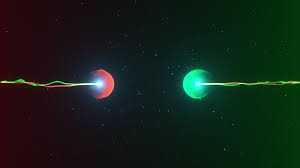 Antimatter is kind of the "evil twin" of normal matter, but it's surprisingly similar – in fact, the only real difference is that antimatter has the opposite charge. That means that if ever a matter and antimatter particle come into contact, they will annihilate each other in a burst of energy.

To complicate things, some particles, such as photons, are actually their own antiparticles. Others have even been seen to exist as a weird mixture of both states at the same time, thanks to the quantum quirk of superposition (illustrated most famously through the thought experiment of Schrödinger's cat.) That means that these particles actually oscillate between being matter and antimatter.

And now, a new particle has joined that exclusive club – the charm meson. This subatomic particle is normally made up of a charm quark and an up antiquark, while its antimatter equivalent consists of a charm antiquark and an up quark. Normally those states are kept separate, but the new study shows that charm mesons can spontaneously switch between the two.

US plans to require COVID-19 shots for foreign travelers

Things That Keep Dr. Fraudci Up At Night: It's Complicated!

Retail Stock Buying In July Blew Away All Records, 50% Higher Than Previous All Time High

Peter Schiff: Central Banks Have Created The Mother Of All Bubbles

Israel 'Ready' To Attack Iran In Response To Tanker Incidents

How to Refill Fresh Water Tank During Camping? 3 Easy Ways