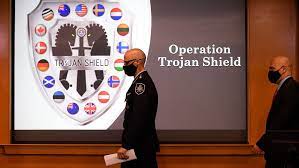 For years, organized crime figures around the globe relied on the devices to orchestrate international drug shipments, coordinate the trafficking of arms and explosives, and discuss contract killings, law enforcement officials said. Users trusted the devices' security so much that they often laid out their plans not in code, but in plain language.

Unbeknown to them, the entire network was run by the F.B.I., in coordination with the Australian police.

On Tuesday, global law enforcement officials revealed the three-year operation, in which they said they had intercepted over 20 million messages, and arrested at least 800 people in more than a dozen countries.

The operation, known as Trojan Shield, represents a breakthrough for law enforcement. Although the authorities have cracked or shut down encrypted platforms in the past — such as one called EncroChat that the police in Europe successfully hacked — this is the first known instance in which officials have controlled an entire encrypted network from its inception.