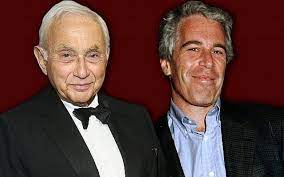 In the fall of 1982, a money manager named Harold Levin got a phone call that would change his life. A lawyer representing Leslie H. Wexner, the founder and CEO of the women's apparel retailer The Limited, said Wexner was looking for a financial adviser. Would Levin be interested? Levin most certainly was. In Columbus, Ohio, where Levin lived, Wexner was a legend. Wexner grew The Limited from a single Columbus store into a global retail empire that included mall fixtures Abercrombie & Fitch, Victoria's Secret, and Bath & Body Works.

Levin landed the job after six months of grueling interviews. He wasn't making Masters of the Universe money—Wexner paid a salary of $250,000 a year—but it was enough for Levin to move his family into a 6,000-square-foot house across the street from Wexner in Bexley, Columbus's most exclusive suburb. By 1986, Wexner ranked sixth on the Forbes 400 list of richest Americans, with a net worth estimated at $1.4 billion. "In New York, I had bankers constantly taking me out to dinner," Levin told me. Once, a banker arranged a private tour of Le Bernardin. "The kitchen was so clean, you could eat off the floor," Levin remembered. Wexner entrusted Levin with increasingly ambitious projects. Starting in the mid-1980s, Levin purchased thousands of acres of farmland in New Albany (population 414) on the outskirts of Columbus, where Wexner planned to build his very own town modeled on an 18th-century Georgian village. "Les sent me to Richmond, Virginia, to look at architecture he wanted to copy," Levin said.

Direct Energy Weapon TR 3B Caught in the ACT!