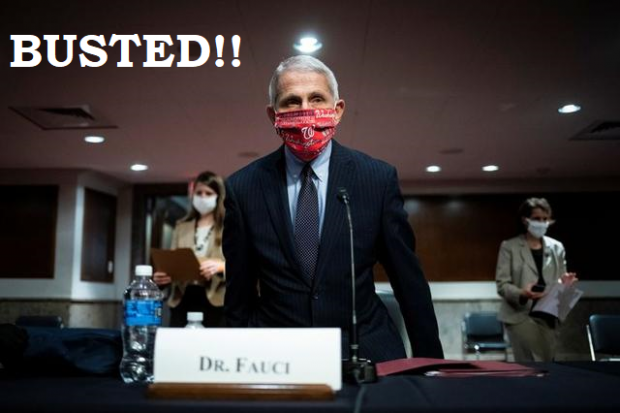 (Natural News) Dr. Anthony Fauci has become the poster boy for what is wrong with our government, as evidenced by the massive emerging scandal involving his so-called "leadership" during the COVID-19 pandemic.

This career bureaucrat — the highest-paid federal employee at more than $400,000 a year — has been the head of his National Institutes of Health agency since the early 1980s. He's on his seventh president. He no doubt knows a lot about everyone in D.C. at this particular moment. He probably knows where a few of the 'bodies are buried,' if you follow.

And because of this insulation from society, he pretty much behaves any way he wants to, up to and including putting Americans lives in danger and, honestly, allowing Americans to die to protect his own interests.

That's the assessment, anyway, of the situation after emails obtained via Freedom of Information Act requests were published last week revealing Fauci ignored a research physicist who told him there were effective, existing medicinal treatments for the coronavirus that caused the pandemic but he chose to push vaccines exclusively.

Emails show Dr. Anthony Fauci was advised by Erik Nielsen, a physicist and CEO of Bio-Signal Technologies, in March 2020, that two drugs could possibly help battle the coronavirus pandemic, but Fauci ignored it, claiming the email was "too long" for him to read.

Nielsen, in the email, said he had instructed members of his family to get "Alvesco (ciclesonide) for emergency use only." He claimed that his "colleagues on the front-line in Japan, China, and Korea found several pre-print papers, that it is an effective treatment for late-stage COVID-19 patients.

"Some patients on ventilators who were approaching death have fully recovered after treatment with ciclesonide," noting "ciclesonide has much smaller particles than other corticosteroids, so it reaches deeper into lungs and alveolis," Nielsen added.

Mind you, one of COVID-19's most dangerous aspects was its ability to attack the human respiratory system, as noted by the high number of elderly people who succumbed to the disease. Many of them had preexisting conditions, but clearly it is common that an older person's lung functions are far more diminished than those of more active, much younger people.

The physicist went on to note that a second drug could also, quite possibly, be used, which he advised his own family to obtain: The drug "is called hydroxychloroquine," he told Fauci, "also seems to be effective and safe."

But, he further noted, "Alvesco is better because it appears to prevent the virus from replicating so infection is wiped out and no longer contagious. Alvesco seems to be two silver bullets in one."

Just two days after getting the email, however, Fauci was asked about the potential effectiveness of hydroxychloroquine in treating people who contracted COVID-19; he responded, "The answer is no." He went on to say during a coronavirus briefing that the "signs of the drug's promise were purely 'anecdotal evidence.'"

In an email physicist Erik Nielsen sent to Fauci on March 2020, he recommended not one, but TWO DRUGS that could help battle #COVID19. One of the drugs was Hydroxicloroquine.

Donald Trump was dragged when he recommended the same drug.