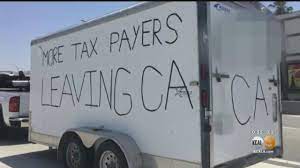 State-to-state migration data recently released by the Internal Revenue Service (IRS) shows that California lost an estimated net 70,534 households—or 165,355 taxpayers and their dependents—in the years 2017-2018, with those fleeing taking around $8.8 billion in net adjusted gross income with them.

Interstate migration flows are influenced by a number of  factors, including retirement, job opportunities, and housing costs. Brandon Ristoff, a policy analyst with the California Policy Center, told Center Square that the flight of billions of dollars from California is driven by the state's "bad policies on the economy, education and more."

The top three beneficiaries of the California exodus were Texas, Arizona, and Nevada. The bulk of the departing Californians filed their taxes in Texas, with the Republican-led state seeing a net inflow of 72,306 taxpayers and their dependents, and a gross income boost of some $3.4 billion.

An estimated 53,476 Californians relocated to Arizona, bringing with them around $2.2 billion in gross income. Nevada welcomed 49,745 California taxpayers and their dependents, along with a gross income of $2.3 billion.

There is little agreement among experts as to how large a role taxes play in state-to-state migration.