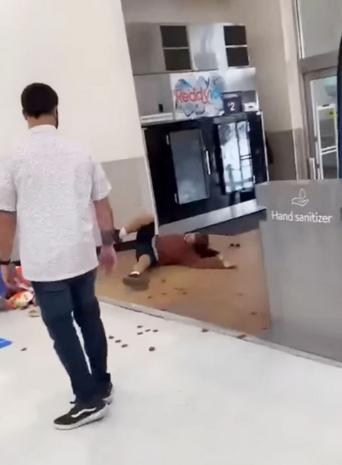 Video of the violent clash has gone viral on social media, raking in thousands of views on Instagram.

Little information is known about the exact circumstances of the fisticuffs.

A version of the cellphone video capturing the bust-up that was uploaded to the site WorldStarHipHop.com on Wednesday was accompanied by a caption that identified the location of the Walmart as being in Englewood.

The video begins with the skirmish already in full swing. It is unknown what sparked the conflict in the first place.

A man in a brown hooded sweatshirt and black shorts pushes a shopping cart laden with merchandise into a Walmart employee, pinning him against a display case near the cash registers.

The unhappy customer then appears to spit at the store worker, who explodes in rage.

The aggrieved Walmart staffer attempts to pursue the shopper to exact revenge, but a colleague in a yellow vest restrains him.

The offended store clerk ultimately manages to free himself, runs up to the shopper and punches him in the head.

'Don't do it, don't do it,' a woman's voice is heard saying off camera.