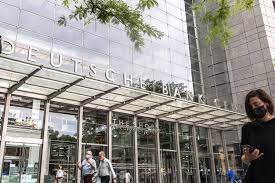 And although their European rivals have been much slower to follow suit, it appears Deutsche Bank, which employs 1,500 investment bankers in the US (mostly in NYC), has finally put its workers on notice.

According to an internal memo cited by the FT, Drew Goldman, Deutsche's head of investment banking coverage and advisory, and James Davies, the head of US investment banking, have informed staff that all of the bank's American teams should aim to resume working in the office no later than the Labor Day holiday on Sept. 6.

"If you are currently working remotely, please begin to plan accordingly with your team and manager to re-establish a presence in the office before or by that date," Goldman and Davies wrote in the memo seen by the Financial Times.

That American banks are returning to the office more quickly than their European peers isn't exactly a surprise. The US vaccination rate has far outpaced that of the EU.

Fortunately for DB's back-office bankers, the memo outlines which type of employees will be required back at the office five days a week, and which will still be able to enjoy "a greater degree of freedom."