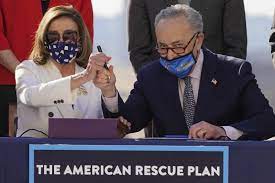 And as Red State reports, she may have just "ripped the heart out of the Democrat agenda (emphasis ours):

While the Democrats have high, if not delusional hopes of fundamentally changing every aspect of American life, from federal voting dictates to essentially outlawing sub-contracting, the actual rules of the Senate have stood in their way. The filibuster, which Joe Manchin and Kyrsten Sinema (among others who are laying low) have pledged to not touch, means that Chuck Schumer and his merry band can't force through things on a simple 50-50 vote.

The Democrats were given a shot of life a few months ago, though, in the form of a parliamentarian ruling that Schumer claimed greenlit most of his agenda. I expressed skepticism at the time in an article discussing the infrastructure package.

Chuck Schumer recently claimed the Senate parliamentarian gave him free rein, yet that decision has not been made public, and there's probably a reason for that.

Well, it appears my skepticism was warranted. In what is claimed as a "new ruling," the parliamentarian effectively rips the heart out of the Democrat agenda.