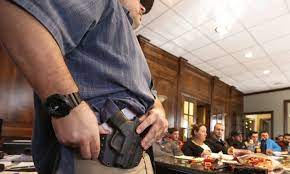 "An employee was watching the kids from the inside and observed the suspect walk up to this 11-year-old girl [on the playground] and put his hands on her in an attempt to take her," Lt. Eynon said. "He ran outside, the employee did, and confronted the suspect. At that same time, the girl had the ability to pull away from the suspect."

According to ABC4, the teacher got all 20 students away from the playground and into the school, which the suspect then tried to force his way into.

After approaching the building, the suspect, 41-year-old Ira Cox-Berry, punched on the window trying to get through—that's when the teacher reportedly produced a firearm and held the suspect off while calling 911.

The teacher was a concealed carry permit holder.

However, as of May 5, people over 21 who may legally possess a firearm are no longer required to have a concealed carry permit after the state legislature passed HB0060.