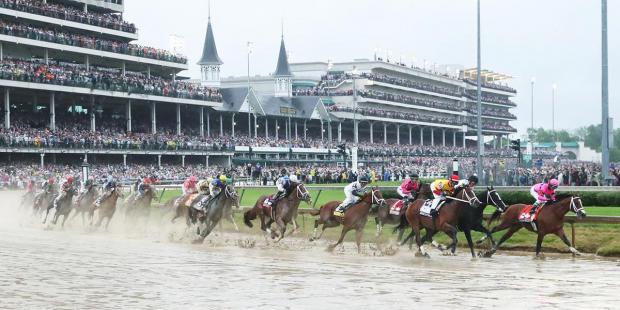 Trainer Bob Baffer was suspended for two years by Churchill Downs on Wednesday after an additional drug test of Medina Spirit confirmed the presence of the steroid betamethasone in the Kentucky Derby winner's system.

Disqualification of Medina Spirit could be next. The Kentucky Horse Racing Commission is still completing its investigation before making that ruling.

But Baffert will not be able to enter any horses in the Kentucky Derby or other races at the storied Louisville track through the spring of 2023.

Churchill Downs says it reserves the right to extend Baffert's suspension if he has any other violations in other states. Baffert has had five in the past 13 months.

A second positive screening would make Medina Spirit just the second horse in the race's 147-year history to be disqualified over a failed drug test.

A laboratory at the University of California, Davis confirmed that a second post-race sample found a prohibited level of the corticosteroid, which is injected to reduce pain and swelling in joints. Clark Brewster, a lawyer who represents Medina Spirit owner Amr Zedan revealed the failed test to The New York Times.

If Medina Spirit is disqualified, Mandaloun would be elevated as the winner of the Kentucky Derby and Zedan would be forced to relinquish the $1.8 million winner's purse.

Churchill Downs initially suspended Baffert indefinitely pending the investigation. Maryland racing officials allowed Medina Spirit and Baffert-trained Concert Tour to run in the Preakness on May 15 only after undergoing three rounds of prerace testing, while New York banned Baffert indefinitely and prevented him from entering any horses in the Belmont Stakes.