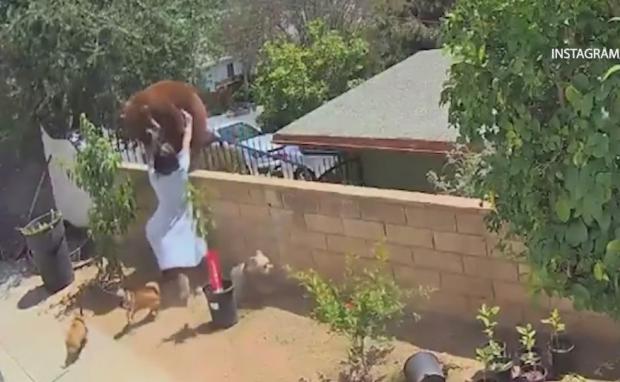 A California teen who charged at a huge bear in her backyard admits she was 'not in her right mind' when she did so - but said she was desperate to save her beloved pet dogs.

Hailey Morinico, 17, was seen on her home surveillance camera Monday charging towards the predator after it clambered atop a wall outside her Bradbury residence.

The mother bear was with her two young cubs looking for food before she began pawing at Morinico's four barking canines - Wednesday, Sparkles, Valentina and TJ.

'Honestly, I did not know it was a bear until right after I pushed it,' Morinico told Good Morning America on Wednesday of the now-viral footage that shows her beating the bear away from her pooches.

'I didn't know I had it in me to be honest. Who does that? Who in their right mind pushes a bear?'

Morinico's mom, Citlally, also appeared on the morning program and said she was 'horrified' by the footage of her daughter's brush with the brown bear.

Miraculously, Morinico only ended up with a sprained finger and grazed knee as a result of the encounter, and experts say she is lucky to be alive.

A full surveillance clip that has since emerged showed the mother bear and her two cubs trying to clamber across the Morinicos' wall when the family's dogs began barking at them. That sent the cubs scattering - and the mama bear into defensive mode.

'The is nothing more dangerous than a mother bear with her cubs,' wildlife expert Ron Magill told Good Morning America.

'Never run at an animal and never make physical contact. That could be disastrous.'