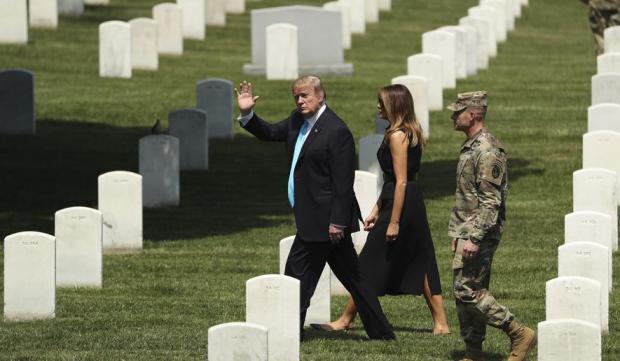 Former president Donald Trump and wife Melania paid tribute to Americans who have paid the 'supreme sacrifice' as millions marked Memorial Day across the country.

Trump posted a statement from Bedminster, New Jersey, honoring the fallen heroes 'who took their last breaths in defense of our Nation, our families, our citizens, and our sacred freedoms.'

Melania then posted a photo of a Star-Spangled banner at half-staff and wrote: 'Today we honor courageous fallen heroes who fought for our freedom!' The image, which the former first lady posted on Twitter, showed palm trees in the foreground, a likely indication that she was still at Mar-a-Lago.

Trump issued the statement under his familiar 'From the Office of Donald J. Trump logo.' Unlike Melania, he is currently under a ban by the Twitter platform.

The former first couple paid their respects as thousands of MAGA fans took to the water in Jupiter, Florida, for a boat parade.

Crowds lined the banks as vessels with American and MAGA flags sailed across the water. Staunch Trump ally Roger Stone – the recipient of a Trump pardon – posed with his trademark peace sign as boaters drifted by.

He hugged his wife Nydia on the back of their boat, days after she was reportedly diagnosed with stage three cancer, in his first public appearance since Trump pardoned him in December last year.

There were also banners saying 'Trump is My President', 'This Area is a Liberal-Free Zone' and 'Trump 2024', as speculation builds over whether he will take a second run at the White House.

After seeing the boat parade, Trump released another statement saying: 'Wow! I hear they have thousands and thousands of boats parading in Jupiter, despite the fact that they tried to cancel us. Everyone is having an incredible time. On this day, we especially appreciate everyone who served and fought for our great Country. I love you all!'