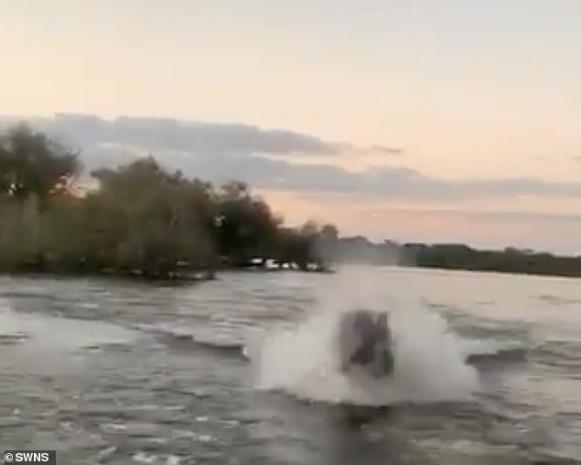 This is the terrifying moment an angry hippo chased a group of tourists' speedboat to force them out of its territory in Lake Victoria, Kenya.

Footage shows four hippos calmly enjoying the water as the boat approaches before one clearly takes objection to the sightseers.

The semiaquatic mammal makes an angry guttural sound as it leaps forward and starts to chase the tourist boat.

Footage shows the hippo gliding through the water as the shocked tourists start to pull away in fright.

The massive animal disappears underwater as it gives chase, surfacing only briefly to breathe.

The hair-raising footage was captured on Friday by Dicken Muchena, 27, who had jumped in the speedboat with three friends hoping to catch a glimpse of a hippo.

It is the second time in six months Muchena, a Geography teacher, has been chased off by an angry safari animal in Kenya.

In December, he was charged by a huge giraffe while on a jungle tour of the Masai Mara Game Reserve in Kenya.