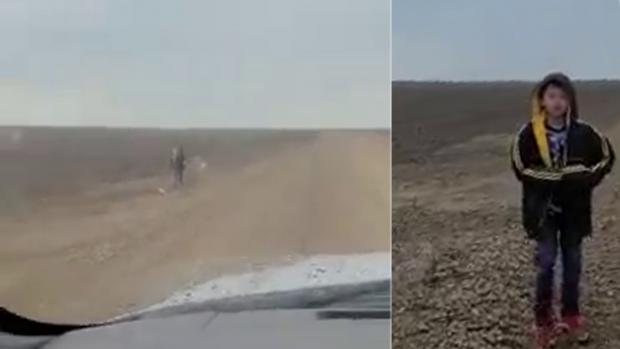 The 10-year-old Nicaraguan boy has been reunited with his mother eight weeks after he was seen in a video crying to a U.S. Border Patrol agent for help.

Wilto Obregón, who was abandoned in the Texas desert after crossing the United States-Mexico border, left the Casa Padre shelter for migrant children in Brownsville, Texas. On Friday, he was transferred to the custody of his mother, Meylin Obregón, and her brother Misael Obregón - a reunion captured in a YouTube video.

'I felt fortunate and very happy because it was not like all the other times I went and returned without him,' Meylin Obregón told Telemundo. 'On the other hand, today was a very special day for me because I no longer returned alone, I returned with my son. Today is the happiest moment of my life.'

Misael Obregón told the network that he expects his sister and nephew will soon travel to Miami, where they will live at his home during their asylum process.

'I had friends there,' Wilto said of the Texas shelter where he had been since April. 'I was happy there, but now being with my mother is more joyful.'

Footage of Wilto crying and pleading with the Border Patrol agent for help highlighted the ongoing crisis at the United States-Mexico border, which unraveled during former President Donald Trump's last nine months in office and continued to spiral under President Joe Biden.

The Nicaraguan child was walking along a road east of Rio Grande City, Texas, when he was spotted by an off-duty Border Patrol agent.

'I was coming with a group and they abandoned me and I do not know where they are at,' the child told the agent in Spanish.

The Border agent asked the boy if he had been told 'to come ask for help,' but the child replied: 'No, I am coming because if I did not, where am I going to go? Somebody could abduct me, kidnap me. I am scared.'