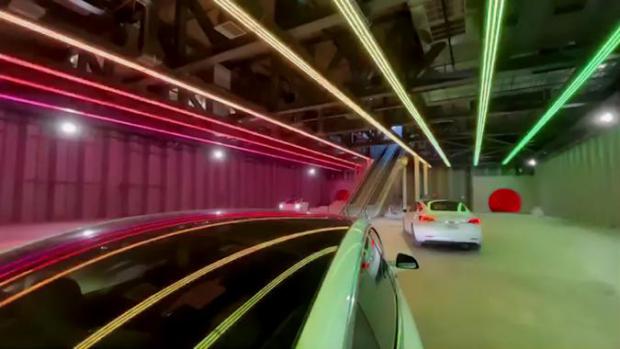 The LVCVA said it would conduct capacity tests for the loop ahead of World of Concrete, the convention center's first major trade show since the COVID-19 pandemic began. The almost $50 million loop connects the three different halls of the convention center via subterranean tunnels and Tesla vehicles that travel through them.

The loop is expected to be operational for World of Concrete, which runs from June 8-10

* The Vegas loop is currently free, but when it expands to the entire Vegas strip then it will cost $5 to 10 per ride.
* he capacity goal is about 4,400 people an hour, but Vital Vegas they will get closer to 7,000 people an hour.
* Larger vehicles are being developed by Tesla. They will be able to hold 12 passengers.
* Construction of the Vegas Loop cost $52.5 million. Fun fact: New York City's Second Avenue Subway cost $2.5 billion a mile. With a "b."
* The Vegas convention center tunnels are .8 miles long, each direction.
* There are three stations, two above ground, one below.
* It's about a 90 second ride between each station.
* The cars are Teslas.
* There are 62 cars.
* Most of the cars are Model 3, with some X and Y in the mix. The X is the one with the "gull wings," above.
* At the moment, the vehicles are completely controlled by the drivers, although they can be quasi-autonomous.
* The cars can travel up to 40 m.p.h. in the straight sections of the tunnel, 30 m.p.h. in the turns.
* About 1,500 drivers applied for the Vegas Loop, only 60 made the cut.
* Most driver applicants failed the driving test, which culminates with having to drive the entire .8 mile tunnel backwards. There's a five minute time limit. Drivers do this in case a vehicle ever stalls in one of the tunnels and they need to reverse their way out.
* Drivers are paid $17 an hour, plus tips.