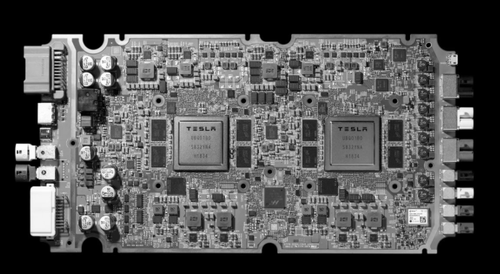 The company is reportedly in talks with semi companies in Taiwan, South Korea and the US. The chips that Tesla uses for its vehicles are mainly made in Taiwan and South Korea. Tesla's interest in buying a plant is still preliminary, sources noted.

Some chipmakers have been allowing large customers to make upfront deposits to secure orders at fixed prices. While that practice is outside the norm generally, it has come to prominence once again due to the supply shortage.

Ambrose Conroy, founder and chief executive of Seraph Consulting, a supply chain consultancy, of Tesla, told FT: "They will buy capacity at first, but they are actively considering buying their own foundry."

Velu Sinha, a partner at Bain in Shanghai, added that he didn't think Tesla would buy their own factory: "They see the price tag for the factory and they go back and get in line."

With A Record 79 Container Ships Waiting Off The SoCal Coast, A Scary Supply-Chain Solution Emerges