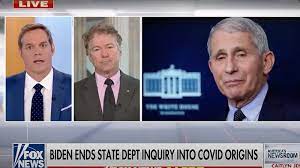 Paul also urged that Fauci "needs to be excluded from the investigation" because he is too deeply involved in the whole thing.

Appearing on Fox News, Paul spoke about the funding that Fauci and the NIH supplied to China.

"Well, sure it's a lot. And there are some reports that it added up to millions over time. But the other thing he said was that there was no gain of function in the application. There are scientists who looked at the application and who absolutely and categorically disagree with him," Paul noted.

"The other evidence that we have is Dr. Shi from the Wuhan lab published a paper that is clearly about gain of function and it that she thanks her group and Dr. Fauci for funding that paper. So there are a lot of contradictions going on," Paul added.

"I think Dr. Fauci should be made to testify under oath about the money that was given to the lab," Paul said, adding "The good news is yesterday I passed an amendment on the Senate floor that says no more gain of function money can be sent to China."